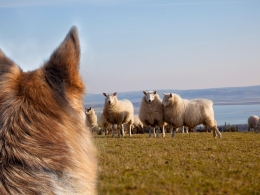 Spring is an important time in a livestock farmer’s calendar. It’s the season of bringing new life onto the farm, a period of hard work and enjoyment at the same time. Unfortunately, at this time of year livestock worrying particularly in sheep is becoming more and more apparent.

According to research carried out by Sheep Watch UK, more than 15,000 sheep and unborn lambs were killed in 2016, with many more injured *. And with 116 sheep killed in the worst sheep attack in memory reported last year and attacks costing up to £10,000**, livestock worrying is a serious issue. At Rural we’ve also noticed more and more cases being reported having seen a 62% increase in the number of livestock worrying claims between 2015 and 2016.

Claims can vary from case to case. One claim made by a farmer in Cornwall related to two pregnant cows grazing on the owners land. Although our customer didn’t see the attack the vets advised that the injuries were highly likely to be caused by sudden strenuous movement like being attacked by a dog. The cows suffered serious injuries and one was unable to stand. Unfortunately for our customer the animals had to be disposed of. The farmer was covered for livestock worrying under their insurance with us and was able to claim for the value of the stock and disposal costs.

Having livestock insurance protects you against the financial loss but cases of worrying can have a big impact above and beyond this. As a minimum you want cover for your stock but it doesn’t make up for the loss in productivity or emotional attachment many of you have with your animals.

Dogs are at the forefront

Although it’s in a dog’s nature to chase other animals they are causing harm to livestock, from stress to physical injury. Dog owners and walkers need to take responsibility.

Under the Dogs (Protection of Livestock) Act 1953 worrying is defined as:

Attacking livestock; chasing livestock in such a way as may reasonably be expected to cause injury or suffering to the livestock (or in the case of females, abortion or loss or reduction of their produce); or being at large (not on a lead or otherwise under close control) in a field containing sheep.

Sometimes livestock worrying isn’t just a one off. In July 2016, we had a claim for a multiple attack over several days whereby 40 lambs were attacked and found dead by the farmer. Fortunately our customer had insurance so they were able to claim for their loss but unfortunately they weren’t able to claim for the full value as the level of insurance wasn’t adequate. Under insurance is often overlooked. It is important farmers ensure they have the appropriate level of cover in the event of a claim.

What should you do?

The National Sheep Association (NSA) advises farmers to do the following:

Conflict between farmers and the general public often stems from the fact people think they have the right to walk freely with their pets across a farmer’s land. Under the Countryside Rights of Way Act (CROW), anyone is allowed access to open land for recreation, however it states that the public can only go on open land if their dogs are kept on a lead near livestock.

Fundamentally the owner of the dog is responsible. The act states that:

“If a dog worries livestock on any agricultural land, the owner of the dog, and if it is in the charge of a person other than its owner, that person also, shall be guilty of an offence.”

Farmers care for their animals and when they are under attack from a dog they will do everything they can to stop them. As a last resort, legally farmers have the right to shoot a dog that is attacking their livestock***.

Whilst not a lot can be done at the time of an attack there are a few things you can do to prevent your livestock from being attacked.

The key to reducing this offence is education and everyone including you as a farmer plays a part in this. You have the opportunity to educate dog owners and walkers, to let them know what damage an attack can cause. You can display signs on gateway to fields as promoted by the Farmers Guardian “Take the Lead” campaign****.

The national sheep association has teamed up with Farmer Guardian and the Sheep Veterinary Society to produce the Stop and Think poster campaign. Posters are displayed in veterinary practices and other public places to educate pet owners. National campaigns are great in building awareness but you could also take action locally. Many dog owners will attend dog training classes so why not find out where the classes are local to you. Speak to the trainers and ask them educate their customers. You could also ask them to display the Stop and Think posters which are downloadable from the NSA website.

The media is also an important means to getting the message across to the general public. Reports are being featured on regional and national news channels, in newspapers as well as on social media. The phrase “Images speak a thousand words” is particularly relevant to this topic. By showing the aftermath of such events increases awareness and will hopefully influence how dog owners and walkers act when out in the countryside. If you’re affected by livestock worrying share your story on social media or with a local newspaper. You can target a wide audience at the click of a button, and the more incidences that are reported the more likely people will start to take responsibility.

Education will happen if everyone gets involved. It’s about being proactive and sharing incidences to raise awareness to help reduce further incidences in the future.