All creature claims great and small 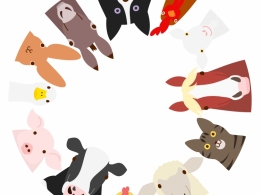 What do a leaping sheep, a hungry horse and a thieving fox all have in common? As well as sounding like characters of a new Disney blockbuster, they’re also the reason for a phone call to someone’s insurer. Because while some people follow W C Field’s advice of never working with small children or animals, most farmers sit on the opposite side of the fence, working with unpredictable creatures every day.

So in homage to all creatures great and small, we spoke to our claims partners Agrical and scoured the internet to bring you some of the weirdest, most tragic and downright bizarre animal-related claims.

One farmer got more than they bargained for with an adventurous calf who not only got on top of a barn, but then proceeded to fall through the skylight. The barn was being used to store furniture so fortunately for the calf it landed on a sofa and survived. Unfortunately for the farmer it then proceeded to charge around the barn, damaging the furniture that had saved its life just minutes earlier!

The resolution: the insurer settled the claim for the damaged furniture.

One night while moving household goods from one location to another, an unsuspecting member of the public claimed he was approached in a ‘menacing manner’ by two foxes. Feeling a bit chicken, he made a run for it, returning to his trolley a little later only to find his portable DVD player and other items had been lifted. Clearly these foxes weren’t worried about a brush with the law.

Resolution: Sadly, the insurer was unable to pay this claim.

This is a rather tragic tale of doomed doggy love. After helping his owner move some sheep, a much-loved dog sadly lost its life after being hit by its owner’s quad. After a couple of days of pining, the dog’s canine companion also went missing, only to be found on the same spot in the same road presumably looking for its mate but having tragically been hit by a car. Devastating for all involved but at least these two doggy friends are united once more.

The resolution: The farmer’s claim for both animals was paid thanks to their farm combined insurance. Some small consolation for this loss.

Seeing the back(side) of your mobile

Where’s the weirdest place you’ve ever lost your phone? It’s probably not as odd as one livestock farmer in Devon who managed to misplace his mobile up the backside of a cow. It was a dark stormy night and he’d been using the torch on his phone when the accident happened. The phone did turn up later (we’ll leave this bit to your imagination!) but unsurprisingly it no longer worked. What a pain in the backside!

The resolution: The farmer received a payout for the damaged phone.

Picture the scene: you’re driving home from the pub with your friends after an enjoyable time at the pub. As you go under a by-pass from out of nowhere a sheep lands on your car, writing it off. How? It had been travelling in a lorry that had overturned. The sheep took a leap off the by-pass and onto the bonnet of the car.

Resolution: This claim was settled but the insurer doesn’t know what happened to the sheep.

When they fancy a snack, most horses will happily munch on some hay, an apple or a carrot. But for some, the taste of car was far more appealing. This is what one customer found after parking his vehicle in a pasture and going out hunting. Upon his return he found his prized 4WD surrounded by horses with dents in the doors and teeth marks all over. The likely cause? A brand of car wax that smells of bananas and was, it appears, irresistible to horses.

The resolution: The cost of the repairs was paid by the insurer.

Do any of these stories sound familiar? And what’s your oddest claim when it comes to the animals on your farm? We’d love to know!