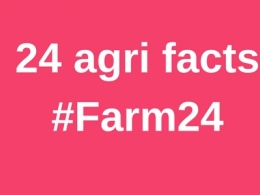 As part of #Farm24 we've put together a list of 24 agricultural facts to celebrate farming in the UK.